The Man in the Tree, Us On the Ground 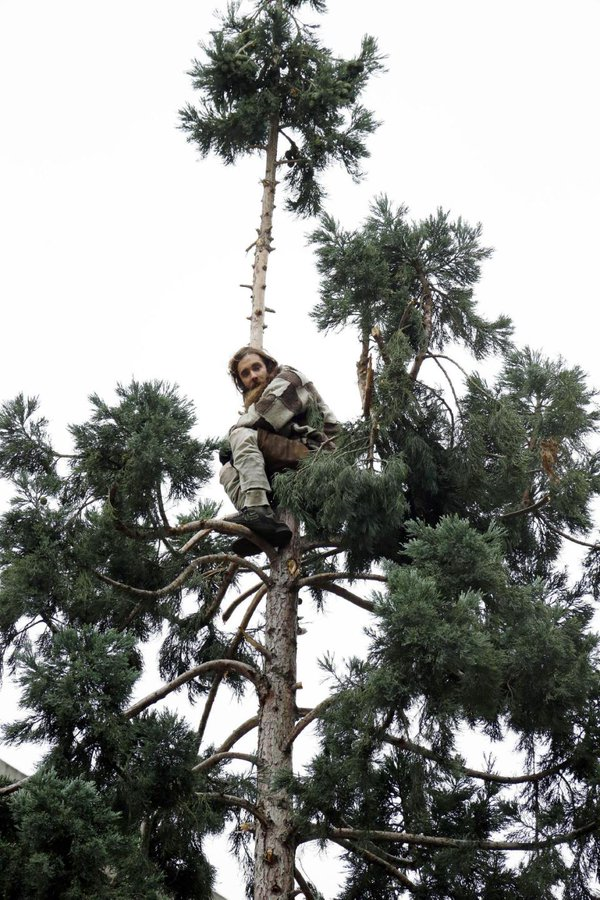 A little over week ago, a man—whose name we now know is Cody—scaled an eighty-foot Sequoia tree in downtown Seattle. A tree that, up until then, had only held arborists checking its health and the trained staging crew that gussies it up with lights and baubles every Christmas. Never a random person. Although as a former young tomboy tree-climber, I always thought it looked like a doable climb and he proved me right.

From our office conference room, my colleagues and I unwittingly had front-row seats and could see his body nestled between tree branches, but not the color of his eyes.

Like any odd, out-of-place visual, it was hard to look away. Hard not to say OMG or WTF or be alarmed on a cellular level since instead of the usual treetops and birds, a human being was perched high in our line of sight.

In the case of a strange or shocking event, there are often two things unfolding. The scene itself and the scene-related commentary and activity.

I found myself more intrigued by the latter.

But Cody didn’t budge, except for the random, agitated flinging of branches, pine combs and fruit at authorities who ordered him down.

From below, there was great interest too. Like a new, temporary tourist attraction.

Was he homeless and nesting in the tree? Was it a protest of some kind? A suicide attempt? A human art exhibit?

We made national and international news and his reasons remained a mystery since he refused to communicate with the police negotiator. Soon, though, it was a given that mental health issues were in play because the absence of them would have ended his nesting.

On the ground, sides were being formed too. For the man, for the tree, for the downtown corridor to return to normal. In time, he even grew a fan base.

When I wandered out for a lunch, I heard one gawker offered to make out with Cody if he climbed down. Another waved a subway sandwich. Photos were still being snapped when I waded back through the crowd. Laughter exchanged.

It was hard to get work done, but I couldn’t stand at the window and stare or poke fun at him. Not that I am beyond inappropriate laughter, but I try not to do it at the expense of people who don’t know better or can’t help themselves.

Having a handful of relatives who, on any given day, are a few missed meds away from scrambling up a tree themselves, I was quietly relieved it wasn’t one of them. If it had been, I would want the chuckles and judgments suspended to care for them in crisis.

With mental illness, cries for help aren’t always clear, smooth, or quick. They are messy and inconvenient. They require patience and heart. Hours into it, Cody was undoubtedly cold, wet, hungry, fatigued, stressed, disoriented and a whole bunch of other things those below who were thinking fairly straight could not fathom. He was also dangerously high, so, it was going to take the time it took.

After twenty-five hours and a hashtag (#manintree), he came down to cheers and medics, and soon after his heartbroken mother was located (in Alaska). Imagine her deep, nightmarish grief at the news that her confused son was lodged in a tree for a day in the middle of a big city unable to talk himself down. That he could have fallen and injured himself, died even, with the slightest false move.

Apparently, the family had lost track of him, which is very easy to do with troubled relatives. They are good at slipping away. Unfortunately, it is also true that an average of thirty people sleep outside Macy’s most nights, mere feet away from that now-famous Sequoia tree. Maybe he was one of them, except he was probably the only “famous” one.

You can sleep in a cardboard house on the sidewalk in dirty clothes and waste, but unless you squat in a very tall tree in a downtown metropolitan area, you are virtually invisible. Because that is just how comfortable we as a society are with letting homelessness and mental health crises take their own course.

Not that I know what the solution is either, except that it begins with compassion and extends to something beyond the status quo.

6 thoughts on “The Man in the Tree, Us On the Ground”