Although I don’t dress nerdy or feel socially awkward, I’ve been geek-like most of my life. Don’t work at it. It’s just there. Math, science and technology are cool to me. I’m into computer games, comic books, and everything Star Trek. Seems like I should have made it to a Comi-con or two, but those people seem obsessed, although I did parade around as Spock’s sister one Halloween.

Of the original Star Trek series, since science officer Mr. Spock was most beloved to me, when I heard Leonard Nimoy (aka Spock), passed away a few weeks ago, I went still with sadness and then felt a flood of gratitude for the actor who portrayed one of my early role models, albeit fictional.

As a child, I thought he was cool. In a nerdy sort of way. 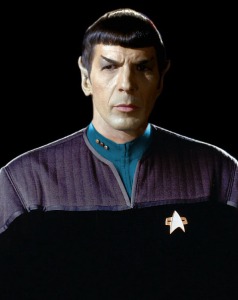 Those almost vertical eyebrows and pointy ears, the way he defied age as a supposed centenarian who never looked a day over thirty in the series, that signature Vulcan greeting which my long fingers seemed to do naturally—what wasn’t to love? 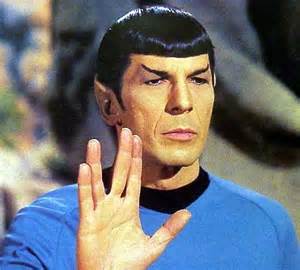 But mostly I admired his smarts and unflappability; the way he rarely came undone.

Reading some of the comments on social media, it was clear that Spock inspired many real-world science careers, yet without really being able to put words to it in my youth, what I aspired to–within the creative life I figured I was bound for—was his emotional and mental mastery.

I wanted to focus my mind.

Perhaps as a child you crave calm, orderly thinking more when you’re trapped in an abusive, alcoholic household filled with uncertainty and chaos. Perhaps you learn to hide emotion because its shadow can turn ugly. Perhaps every dreamer needs logical parts anyway so our art doesn’t topple us over. Or, perhaps I globbed onto Spock as if he were some distant, imaginary friend because I had weird eyebrows too.

It meant something to see him use focus and reason to prevail in tough situations. Maybe he’d slowly raise an eyebrow every blue moon when things got extreme, but he was largely unfazed by obstacles or challenges and he helped me believe that I could live beyond my early circumstances if I just kept my mind right too. So, I pretended I had that in me until I did.

Heart and imagination are in play too, of course, and I still have moody and irrational waves. That steady, persistent, level-headed beat grounds my crazy though like a metronome and it is really how I continue to find calm during life’s storms and accomplish my goals.

Now, whether Leonard Nimoy, who I hear was also a poet and photographer, shared the logical science officer’s demeanor, I’ll never know because he flip-flopped on this over the years himself and I only knew him as Spock, the fictional character he excelled at so well the world believed him.

At least I did.

So, before I get into my Star Trek movie marathon, I just wanted to take a moment to say thank you Mr. Spock. Thank you so much.