You’d think that as the only girl of five siblings I’d be sports-obsessed too, but somehow I looked the other way.

My big brother played defensive tackle in high school, while I rarely really knew what was going on during a game, other than the quarterback got the ball, threw it and then somebody else ran it to the goal post on the other side trying to avoid being tackled. To this day, the rest of the game—the downs, the fouls, even most of the player’s roles, remains largely a mystery.

Though, to be social and get my head out of the books, in college, I found myself at a surprising number of football games. We had a losing team, so the lure was the exhilarating pre-game and half-time entertainment provided by the marching band and cheer squad that gave it that loud, festive, big-party feel that young-me sometimes craved.

Once, a very long time ago, I also danced with a Seahawk who was as supersized as Marshawn Lynch. If a girlfriend hadn’t told me this afterward in an excited whisper I would have never known because to his credit, he hadn’t told me, or maybe he did—the music was deafening. Anyway, I thought, oh, that explains why his neck, chest and arms were so huge.

Rarely were my loves interested in sports, but with the few exceptions, I planned spa days or shopping around games and everyone was happy.

Well, except for the one basketball fanatic, who kept trying to reel me in with stats, reciting player names like they were buddies. To be a good sport, I attended a few Sonics live games with him, and hands down, the best thing was watching those tall, lean, sweaty men (my preferred male body type) run up and down the court. In good seats, it was, well, very satisfying. But when he tried to drill down to game specifics, my eyes glazed over and I started breathing funny. I think it dawned on me then that sports, like award shows, might appeal more to watcher types.

In general, I’d rather be in the game.

Still, last year I thought I’d try to get with the contagious Seahawks team spirit for the adrenaline rush that seems to prevail when we have a winning season, because it does have elements of energizing fun.

Yes, I’ve used the Seahawks as a mood-enhancer.

My process of coming to the game was short and simple.

So, I turned on the radio and listened to the host, a former Seahawks himself, describing what was happening on the field and I got caught up too because his images were so vivid it seemed like I was on the field with them.

Every time, I returned to my car, I was curious to see what was happening. When the teams were tied, I was back home so I turned on the TV, and that final throw was really something, but I wasn’t really sure why the GB guy wrapped himself around Kearse like an anaconda and kept holding onto him long after he flew up and caught the ball to score the final touchdown. I called a guy friend (the same one I asked what the 12 meant) for an explanation and his deep laughter filled my ears before he said: He was hoping to shake the ball loose because then the point wouldn’t have counted. 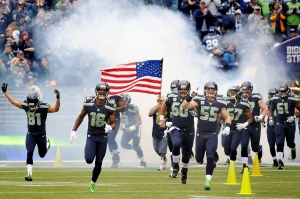 So, having come to the fun of the game all on my own, I tuned into the Super Bowl yesterday—my first whole televised football game—and watching those giants who should not be able to move so fast and throw so far and get all those personalities and egos coordinated to give that edge-of-seat ride was sort of inspiring.

The Hawks played their warrior hearts out and left it all on the field. They didn’t win it this time, but they were all in and I was too, so I’ll probably join them again next season.