When It Comes to Exercise, Borrowed Will Beats No Will, So Thanks Serena Williams

Two Sundays ago I was taking FOREVER to get my butt out the door for weekend exercise—a six-mile walk around the lake. Timing is everything, and if I don’t get it in early, it’s an uphill climb. But instead of making that move after a breakfast protein shake, I piddled. Made a quiche and had a second serving. Pulled outfits for the week. Read Russian president Putin’s open letter to the United States about Syria, and then used it to sweep up some incense ashes, which turned to Swiffering the whole living room.

Since stalling begets stalling and I do not own the clever, yet non-existent Eject Master 1000 that would thrust me out of my home and onto the lake trail, I grabbed the remote, rationalizing that if I caught a quick something on Comedy Central the laughter would boost my desire to exercise. Lucky for me when I clicked on the TV there was defending champion Serena Williams whacking her ruthless slam-serve over the net at the US Open title rematch against Victoria Azarenka.

You’d think I’d keep her competitions on my calendar since I’m a fan, but apparently I don’t have the something that causes me to track sporting events so I catch her accidentally, and in this case, in the nick of time. The unseen commentator, a chatty fellow who I for some reason concluded liked donuts more than fitness, passionately criticized her poor performance at the beginning of the match—as if he’d survive one serve—and being both into Serena and comeback stories, I immediately started cheering at the TV.  “Bring it,” and “You can do it Baby Girl.”

Her quitters-never-win drive has motivated me so many times I felt I owed her that.

Often, I’ve caught her ferocious, primal expressions and connected because sometimes it takes looking like you are going to kill something to get tough stuff done.

But her eyes weren’t bulging or crazy-scary this time. Her jaw wasn’t clenched. Her forehead wasn’t a mess of bunched tension. She looked focused and calm. Xanax calm.

And suddenly, as though calling on the quiet muscle of her own name, she turned it around, rapidly racking up point after point against poor Victoria who seemed spooked by her power surge.

Humming Whitney Houston’s One Moment in Time, I slid my socks on, laced up my sneakers, grabbed my water bottle and headed for the lake.

My dream is not to need this sort of hero-inspiration, but let’s face it: I KNOW EXERCISE IS GOOD FOR ME. I love being outside in nature. Still, my natural inclination is to fill a two-hour block of free-time at the spa where I can be just bones and fat, not an aerobic beast, so sometimes when I do not have the miraculous force of sheer will and grit to get my butt moving, I borrow Serena’s.

If a woman with four Olympic gold medals, widely regarded as one of the greatest tennis players of all time, and personally held as my Just-Do-It-Times-Infinity poster girl doesn’t inspire fitness, who will? 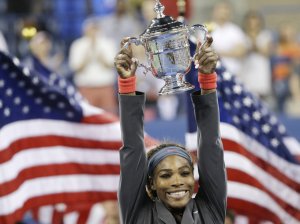 I didn’t get to see her win The Open, because that would have involved me sitting on the couch watching her play her game and forfeiting mine. I did, however, hear on my radio as I walked the lake that she had won, smiled, and picked up my stride.

Who or what inspires you to keep it moving?